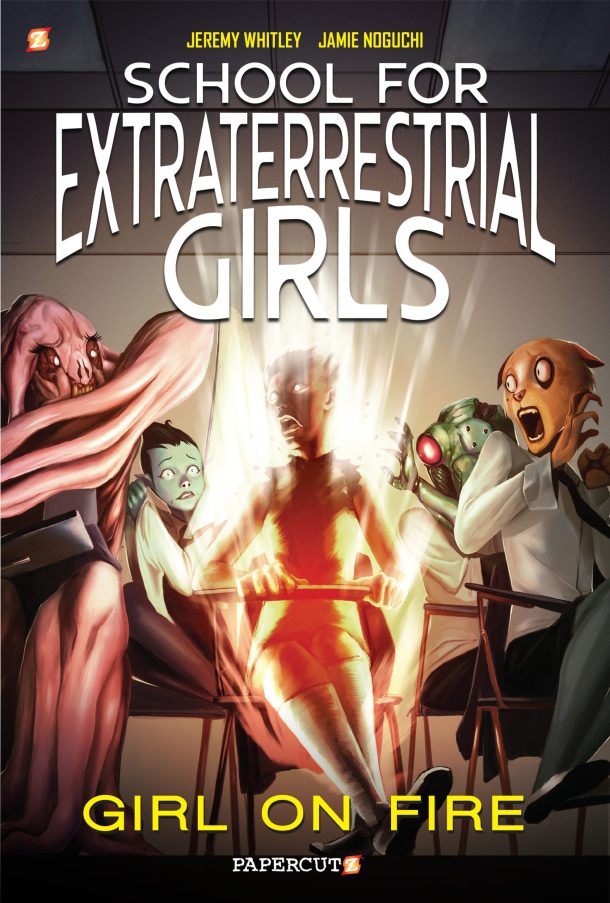 I'm so excited!!!! School for Extraterrestrial Girls Volume 1: Girl on Fire is finally finished and ready for preorder!!! And if you click on that link, you can download and read the first chapter for free! If there's a limit to exclamation points, I'ma break that shit in this post!!!

Working with Jeremy on this book has been a true delight. There have been moments when I wanted to shout at Tara and moments when I just wanted to hug her as I was drawing pages. I've also learned a whole lot about what it takes to complete a long form project like this. Papercutz has been super supportive throughout the process and we couldn't have asked for a better team. I can't wait for everyone to get their hands on this book!!! I'll be sure to throw copies at everyone I see.

So now you can see what's taken me away from YP for so goddamn long. I'm taking a short break to finish up some projects that piled up during production, but I do intend to get back to some YP goodness. I probably won't be able to sustain a regular schedule since Book 2 is on the near horizon, but I plan on updating as I can.

If you would like to see a full preview of Book 1, I've posted the full colored book over at my Patreon in all its glory! I also post a weekly podcast over there with news and commentary on the art scene so if you're looking for things to occupy your brain for a few minutes, check it out!

Alright, that's it for now! I'll yell about all sorts of updates and such as they happen!

So clearly, I haven't been around the site much. I still answer the occasional comment that pops up, but I haven't posted anything proper in a good long while. I didn't want to sound like I'm making excuses, but I think maybe it's worth it to just let you know what's been going on.

So me and my friend Jeremy Whitely have landed a three book deal for a property that we've been pitching for a while. And I'm in the thick of inking pages right now. I probably won't be done until end of this year, early next which is why I haven't had a chance to get back to YP in a while now.

I usually have a bajillion things going on all at once which should come as not small surprise. But I've dropped a lot of extra stuff (haven't even blogged in months) to concentrate on getting this first book done and I'm still running behind, even with 3am being a very familiar time of day for me.

I do plan on getting to YP once this first book is turned in. And hopefully, I'll be able to time manage much better for the next two volumes so I can have some breathing space.

So that's where I've been. I haven't given up on YP, I just haven't had time to do anything else but work on this first book. I'll be pimping the shit out of it when the publisher makes the official announcement to be sure. But until then, it's back to the grind for me!

I have always dreamed of working at a big studio. And I used to think that now that I

Perfection paralysis, how to deal with it, and other thoughts.

I've spent a month with the iPad Pro and have some thoughts on what types of creators will find this to be a useful tool. This would have been a very different review without the reveal of iPadOS this past week.

Please take my thoughts with many, many, MANY grains of sand. I don't have other devices to compare the Pro to so it's not a very thorough review in my mind. But I try to answer the question, "What type of creator is the iPad Pro for?"

View/Post Comments
Mingling For Success in Business! is What This Would be Titled if I was Any Good At It
Posted May 23, 2019 at 04:13 pm

As I get older, I find that mingling in general social situations to be just as terrifying as it was for me in high school. I don't think that it's hindered me too much in my career, but I definitely feel like there's more I could be doing.

If you have any tips for mingling in social situations, please please PLEASE let me know! I am dreadful at it.

Even if you set yourself up for ultimate success at a convention, you still might leave empty handed. Here are some thoughts on why you might not be making any money at a show.

Who am I seeing at Awesome Con this weekend?!

View/Post Comments
Unlocking the Mysteries of the Business Card in the New Willennium!
Posted April 11, 2019 at 01:35 am

I feel like it's a great tragedy that no one ever talks about the Willennium. Like we're all living in it, why can't we just admit it?

Spoilers, no! But I do think school can be worth it.

Mat doesn't like to share his social media stuff, but here are some links to find Nick's work!